Skip to content
Home News DW 473 extended; ecologically and year ahead of schedule

DW 473 extended; ecologically and year ahead of schedule

27th October was the first day when vehicles could drive once again on the section of provincial road No. 473 between Uniejów city and junction on the A2 motorway. The project, for which EKKOM Sp. o.o. had prepared the project documentation, had been completed a year earlier than it was planned.

The investment included:
– expansion of the road with berms, intersections of the provincial road with public roads and reconstruction of roads of other categories at the inlets of the intersection,
– Demolition and construction of culverts, bus bays, conventions,
– Construction of culverts and temporary access roads performing the function of the provincial road No. 473 at the time of the demolition and construction of fixed culverts, open and covered roadside ditches with outlets and devices purifying rain water, lighting and sidewalks,
– Reconstruction of public utility networks (electricity, water, telecommunication, drainage system).
– Logging of trees and bushes colliding with the investment, reconstruction and execution of road signs and markings and protective barriers instalation. 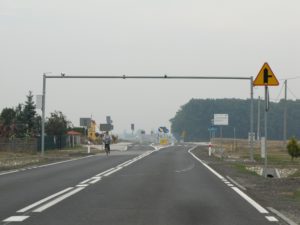 Drivers and environment will benefit from the technology used in the investment. It is based on recycled old bituminous pavement. The investment counted for more than 8.5 km of the road. The project “Development of the provincial road No. 473 on the section: border of the province – Uniejow” is funded by the Regional Operational Programme for Lodz province for years 2014-2020. The value of the project is estimated to more than 25 million PLN.

This website uses cookies so that we can provide you with the best user experience possible. Cookie information is stored in your browser and performs functions such as recognising you when you return to our website and helping our team to understand which sections of the website you find most interesting and useful.

Strictly Necessary Cookie should be enabled at all times so that we can save your preferences for cookie settings.

If you disable this cookie, we will not be able to save your preferences. This means that every time you visit this website you will need to enable or disable cookies again.